A music teacher is working to make the ancient Chinese zither popular with young people.
The world premiere of seven musical pieces by Chinese composers was at the concert Music Contemporary From China 2018 at Alice Tully Hall of the Lincoln Center for the Performing Arts in New York in late January. The composers are all faculty members of the Beijing-based Central Conservatory of Music.
The piece, also performed by musicians from the conservatory, featured both traditional Chinese instruments and Western instruments.
"The new works have different styles and guzheng (Chinese zither) is capable of making versatile sounds," says Ji Wei, a player of the instrument and an associate professor at the Central Conservatory of Music.
"I was very excited and couldn't wait to share the new music with the audience in the United States," Ji says of her preparations in Beijing before the concert of Jan 27.
Ji, 39, began to learn the ancient plucked instrument as a child and recalls how audiences were curious about guzheng when she first performed abroad in Japan and the United States in the early 1990s.
"Even while I was in an elevator with my guzheng placed next to me, people who entered the elevator would ask me about it," Ji says.
Now, she says more composers are interested in the instrument and are willing to write music for it, which has kept guzheng alive as well as expanded its repertoire in recent times.
Before the concert in New York, Ji had performed with the Vienna University Philharmonic at the Musikverein in Vienna on December 11 in a concert, which was the European premiere of composer Vijay Upadhyaya's new work, the 75-minute Chang'an Men. Upadhyaya, an Indian-born, Vienna-based composer was commissioned to produce the piece by the China National Symphony Orchestra. 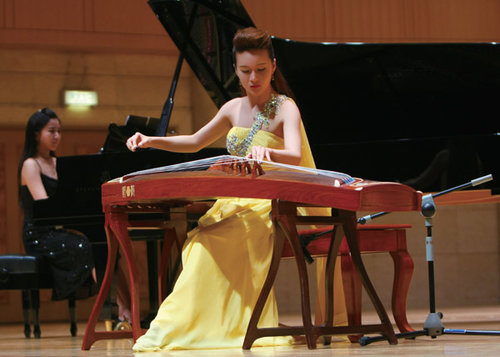 Ji performs with her guzheng ensemble at the Beijing Concert Hall in 2013. [China Daily]

Speaking about Ji, Upadhyaya says: "She is one of the most accomplished and professional guzheng players in China and the world. I was lucky to have her as a soloist in my composition. Actually, I needed to consult her sometimes regarding the technical details of the instrument while composing."
Meanwhile, the Chinese musician has been delving into traditional music as well as finding new sounds for her instrument.
Speaking about her work, Ji says: "What I want to do is to display the beauty of the instrument by playing classic guzheng pieces, such as A Moonlit Night on the Spring River, The Evening Song of Fishermen, High Mountain and Flowing Water, and to bring the modern side of the instrument to people, who may have ignored its potential."
In 2005, Ji made history when the classical recording label Deutsche Grammophon published its first-ever guzheng piece At Night on the Lake Beneath the Maple Bridge, featuring her performance with world-renowned Chinese pianist Lang Lang. Ji has also recorded dozens of solo albums and has authored textbooks and played with top ensembles around the globe.
Born in Shijiazhuang, Hebei province, Ji started to learn to play the instrument at the age of 5 at a local art training school as her working-class parents wanted their only child to receive art education. Then, the guzheng was not commonly seen in cities in China.
"The instrument was expensive and my mother drew the strings of guzheng on a piece of paper for me to practice at home. I could only play the real guzheng at the school," recalls Ji. "For me, a shy young girl then, the instrument was very expressive."
In 1992, she was admitted to the middle school attached to the China Conservatory of Music in Beijing and Wang Zhongshan, one of the best-known guzheng musicians, was her teacher. After graduation she obtained her master's degree from the Central Conservatory of Music in 2004 before starting to teach there.
Ji was interested in blending the traditional instrument with modern sounds even as a student.
"I am interested in working with musicians of different styles and that's the best way to promote guzheng as well as discovering the potential of the instrument through collaboration," says Ji, who has participated in workshops held by international conservatories.
Before her master's degree was complete, Ji was invited to perform in a concert with French electronic music artist Jean Michel Jarre at the Forbidden City in Beijing.
To popularize the instrument among the young, Ji initiated a guzheng ensemble in 2008, which has since gathered students from the Central Conservatory of Music and gives performances at venues like the National Centre for the Performing Arts and Beijing Concert Hall.
"I decided to become a teacher when I was a young student. I want to inspire my students, too. It can be very exciting to challenge them to find something new while remaining rooted in traditional Chinese music," she says.