Apples symbolize safety and peace in China because the Chinese word for apple, ping guo, shares the same sound as the word for safety, ping an. Accordingly, apples are a welcome fruit in winter, especially during Chinese New Year celebrations. Most families will have a big plate of apples on prominent display. By having apples at home, the Chinese hope to have a New Year free of troubles and turbulence.

My grandmother used to build a large pyramid of apples during Chinese New Year. She placed this in front of the picture of my grandfather (who passed away many years ago). She did this to wish him safety and happiness in his world and to ask him to watch out for us and keep us safe and sound. During the New Year celebrations, we would bow in front of my grandfather's picture to pay him our love and respect.

Pears are not used as gifts or displays during Chinese holidays. This is because pears are called li in Chinese and this is the same sound as the word for "separation." Therefore, it is traditionally bad luck to have pears during family celebrations and holidays.

Interestingly, pears can have a very different meaning outside of China. One of my best friends in the United States gave out beautifully wrapped pears as wedding favors. At first I was perplexed, but then I realized her wittiness in this gesture-"pear" sounds just like "pair" which is perfectly appropriate for a wedding where a pair comes together. How funny that the same fruit can have such an opposite meaning in two different cultures! 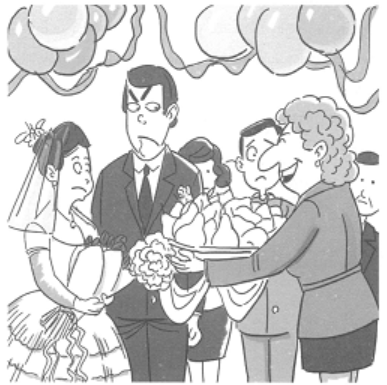 Peaches are another great fruit to display during Chinese festivities. The Chinese believe peaches are one of the healthiest fruits a person can eat, and that they will extend one's lifespan if eaten regularly. For that reason, peaches are a symbol of longevity. They are great gifts for elderly people because they serve to wish them a long and healthy life.

(Incidentally, plums and apricots are believed to be very harmful. One folk-lore story says that "peaches nourish, plums harm, and apricots bury !")

Well, it is easy to figure out why pomegranates are lucky fruits! Its many seeds mean fertility in China. Traditionally, the Chinese believe it is a blessing to have many children and grandchildren. Even today, despite the government's "one-child" policy for each couple, it is still a good gesture to give pomegranates as gifts to newlywed couples.

(selected from 101 Stories for Foreigners to Understand Chinese People by Yi S. Ellis and Bryan D. Ellis, published by China Intercontinental Press in 2012)