Memory of Aili Garden lives on through its historical tales

The Shanghai Exhibition Center, or the former Sino-Soviet Friendship Building, is an eventful hub and a centerpiece of Nanjing Road W.

In 1954, this landmark was constructed on the site of a decayed garden belonging to Jewish tycoon Silas Aaron Hardoon, who owned half of the properties along Nanjing Road in the early 20th century of Shanghai.

“Mr and Mrs Hardoon’s former home, the beautiful ‘Aili Garden’ built on the current site of Shanghai Exhibition Center, was a gift from Hardoon to his beloved wife. Covering an area of some 300 mu, or 200,100 square meters, the garden’s picturesque scenery topped the city’s private gardens and was nicknamed ‘The Grand-View Garden of Shanghai,’” says professor Wang Jian from Shanghai Academy of Social Sciences, author of the book “Shanghai Jewish Cultural Map.” 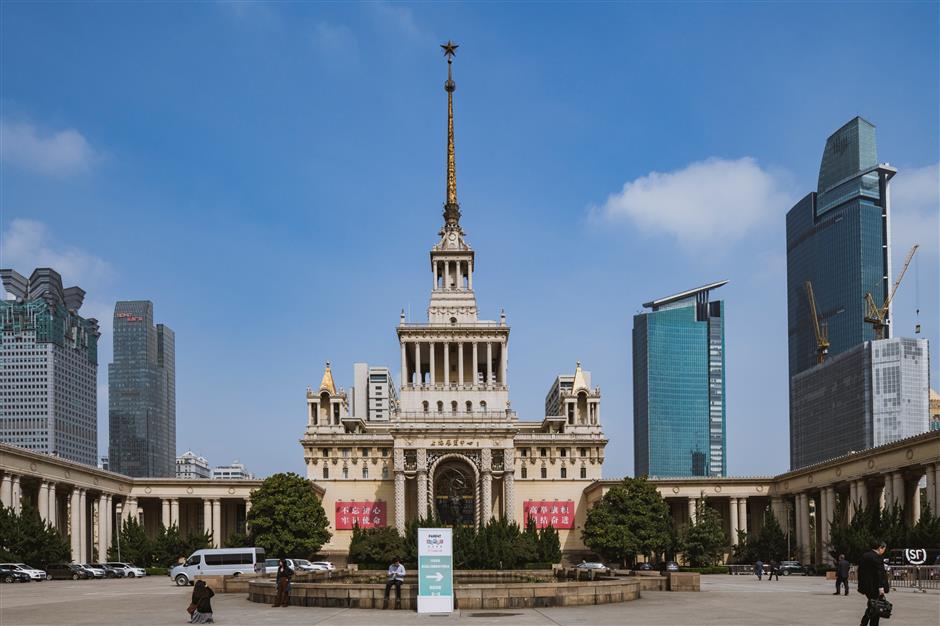 The Shanghai Exhibition Center was built on the ruining site of Aili Garden, the private garden of a British Jew named Silas Aaron Hardoon.

A token of love

According to the book “Nanjing Road, 1840s to 1950s,” Hardoon constructed the private garden named Aili Garden, also known as the Hardoon’s Garden, after making his fortune from investing in the city’s real estate market. The garden had become a prosperous scenic spot in Shanghai, where a college was initiated and many famous Chinese scholars and artists, including Wang Guowei and Luo Zhenyu, were invited to teach lessons.

The garden’s neighboring street was named Hardoon Road, which is today’s Tongren Road. Hardoon’s own legendary life had become a mirror of old Shanghai, the paradise of adventurers.

Born into a poor Jewish family in Baghdad, he came to Shanghai penniless to work for the David Sassoon, Sons & Company as a gatekeeper in 1868. But the hardworking foreigner quickly became a genius in the acquisition of commercial property, chiefly retail property along Shanghai’s main thoroughfare.

At that time Xizang Road was still a suburban area and it was Hardoon that suggested the International Settlement should expand toward the west to today’s Jing’an Temple. And there used to be other opinions like extending to the north or the south.

Hardoon also profited from his vision. Afterward he founded his own company on Nanjing Road and made a huge profit from investing in the city’s booming real estate.

After marriage to Shanghai-born woman Luo Jialing in 1895, the former lonely expatriate finally had a warm home in the city. A decade later he built the fancy garden as a token of love for his wife.

According to Chen Zhehua and Zhou Xiangpin’s co-authored academic paper “The Research of Aili Garden in Shanghai,” the garden was designed by a famous Buddhist monk Huang Zongyang, who started building it in 1903 and completed it in 1909.

The East-meets-West garden was like a fantasy land of old Shanghai, featuring large lawns, lush trees, water ponds, rockeries, wooden bridges and a rainbow of pavilions in different shapes and made of diverse materials. 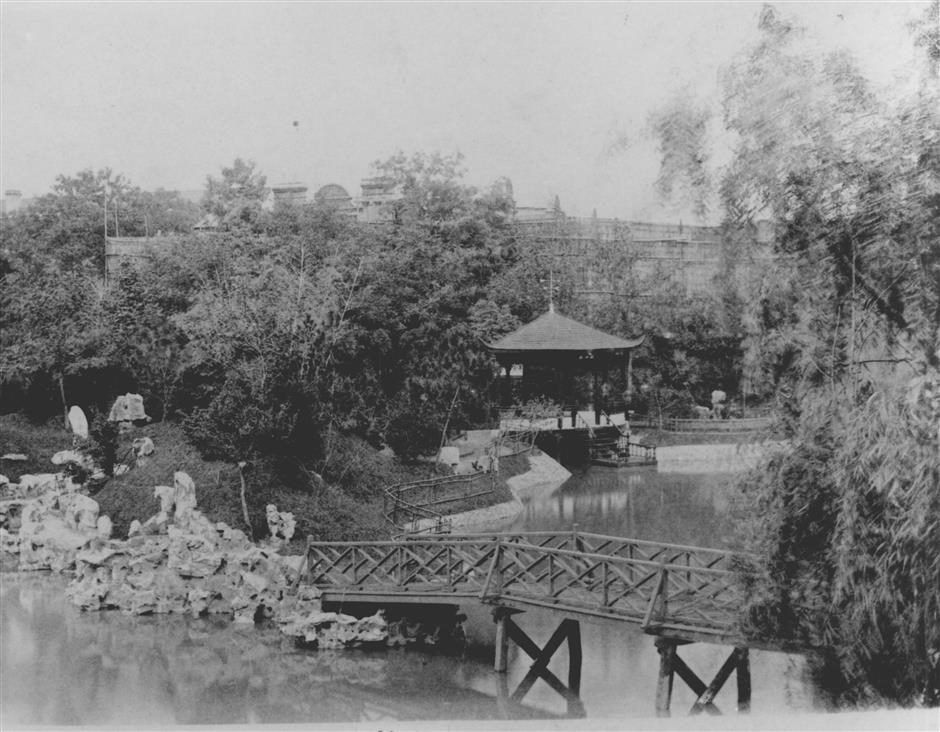 Scenery of Aili Garden in the 1910s

Having studied in Japan for years, Huang combined Chinese classic garden art with the Japanese and Western garden design and decoration.

Hardoon’s wife Luo Jialing, or Liza Hardoon, had great influence on her husband.

“She persuaded Hardoon to believe in Buddha, sponsor the publishing of Buddhist books, found a university of wealth and wisdom, and to love Chinese culture. Having no children of their own, they adopted nearly 20 Western and Chinese orphans. One of Hardoon’s Western adopted daughters, who spoke fluent mandarin and Shanghai dialect, told me the Hardoons appreciated Peking Opera and used chopsticks at home,” Wang recalled.

When Hardoon died in 1931, Luo fell heir to the bulk of her husband’s estate and became Asia’s wealthiest woman. The North-China Daily News reported that “the couple lived together very happily for 45 years and were devoted to each other.”

According to the book “Shanghai-style Gardens,” Aili Garden, at its prime time, had 80 scenic spots and housed up to 800 people, including bodyguards, butlers, servants, monks, teachers and students.

However, this wonderland did not last long. After Luo passed away in 1941, many of their adopted children fought for legacies and the garden lacked proper maintaining. It was occupied by the Japanese army after 1941 and was completely left to ruin until 1949. 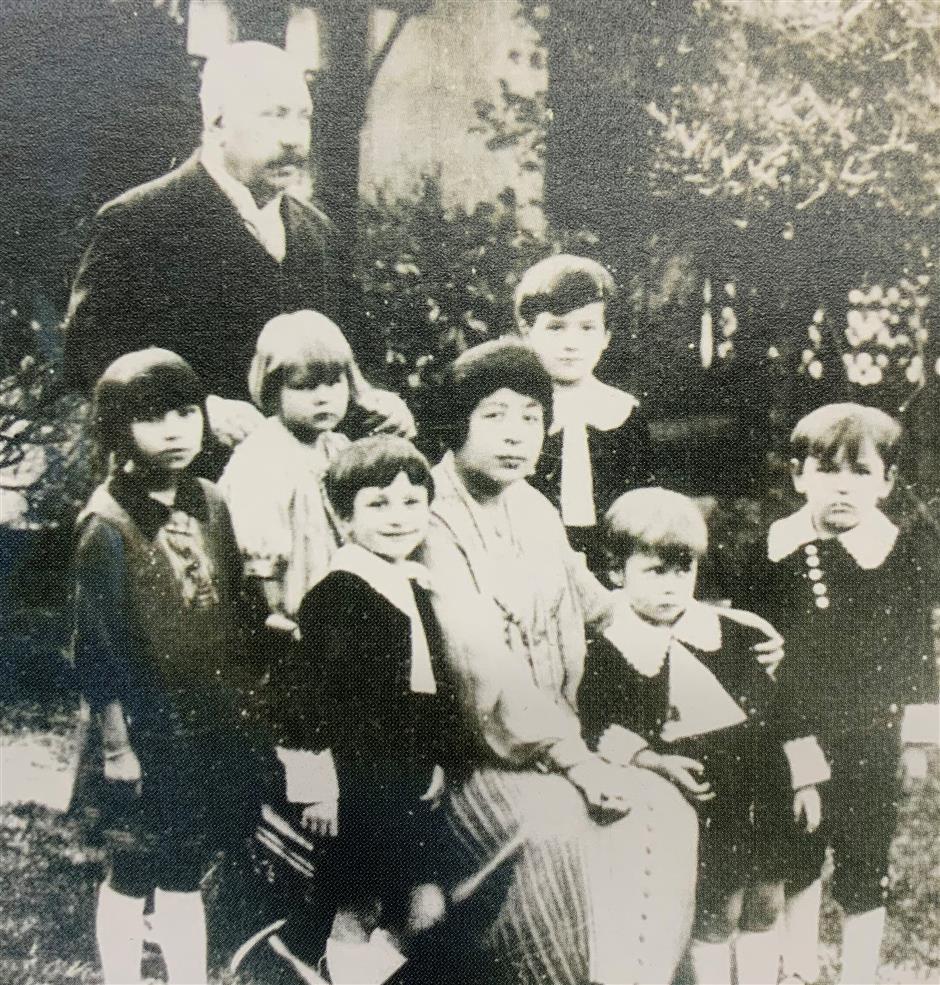 Mr and Ms Hardoon with their adopted children in Aili Garden

Though gone with the winds too soon, Tongji University professor Qian Zonghao noted, it remained an influential garden in modern Shanghai history.

“People who had lived in this garden, including Hardoon, Luo Jialing, monk Huang Zongyang and butler Ji Juemi were part of the legend in the modern history of Shanghai. In addition, a galaxy of nobilities, revolutionaries and literary figures from Empress Cixi, Dr Sun Yat-sen to poet Xu Zhimo were all associated with the garden’s owners or joined events here.

“Besides, a large number of Buddhist scripts and academic works were published in the garden, too. When famous artist Xu Beihong came to Shanghai, he lived in the garden where he met his future wife Jiang Biwei. Both later studied in Europe with Hardoon’s financial support,” Qian says.

So despite the fact the garden is gone, the memory of it still lives on.

The ruins of the Aili Garden confronted a new fate in 1953 when the Chinese and Soviet Union governments decided to build three Sino-Soviet Friendship Buildings in Beijing, Shanghai and Wuhan. In Shanghai, the officials chose between three possible sites — an automobile repair plant on Siping Road, a farm on Guangzhong Road and Aili Garden on Nanjing Road W. Hardoon’s garden was finally chosen for its central and convenient location and proper size.

When the project of Sino-Soviet Friendship Building kicked off in Shanghai in 1954, Xinmin Evening News called it a “gigantic socialism architecture” of the city in a news report on May 4.

The report said this grand architecture covering an area of more than 95,000 square meters would include a central hall, industrial hall, cultural hall, agricultural hall and a cinema with a capacity of 1,000 people.

“The central hall has a steep tower. A huge red star, which glistens at night, will be installed on the top. With the tower-top red star at a height of more than 100 meters, it will be the tallest building in the city,” the report said. 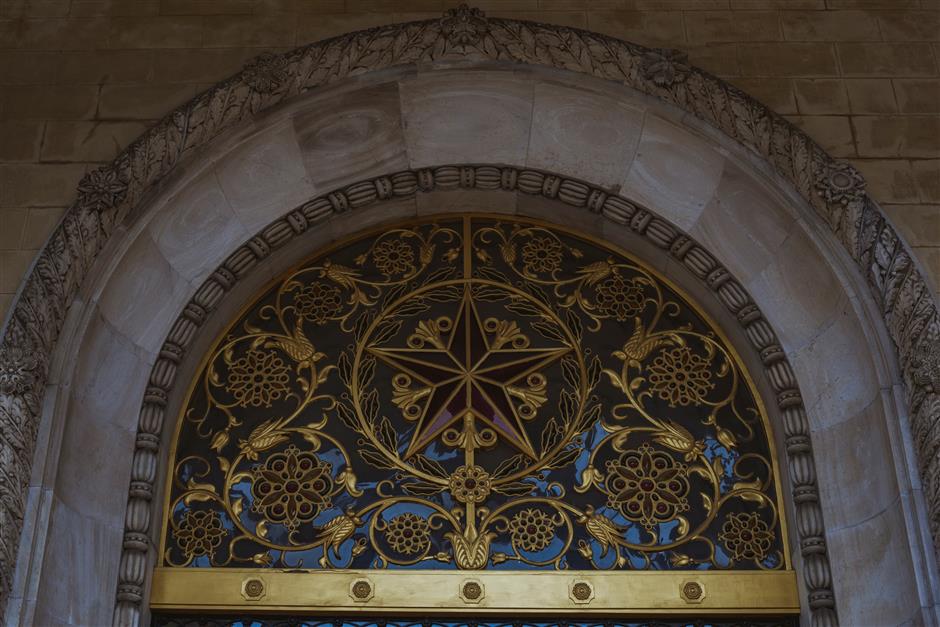 The construction was designed by several award-winning architects from the Soviet Union in cooperation with Chen Zhi, one of the first-generation Chinese modern architects. The project was built with Chinese materials by Chinese workers.

Professor Qian notes that due to Shanghai’s soft soil, which is different from Russia’s solid frozen soil, the exhibition center has sunk a little bit over the years, but not tilted thanks to Chen Zhi’s adaptation on Russian architects’ plan.

Graced by many huge, honey-hued columns and sculptures, it has hosted several of the city’s most important events, including the municipal congress meeting, the annual Shanghai Book Fair and the exhibition showcasing “Masterpieces from the Centre Pompidou 1906-1977” in 2016.

Standing in the prominent downtown location, the exhibition center still serves as a grand-view garden that houses important figures and new stories in Shanghai. Tips:Built in 1954 as the former Sino-Soviet Friendship Building, the Exhibition Center now opens to the public, which hosts a variety of exhibitions almost throughout the year.

The spacious Hardoon garden at 1375 Bubbling Well Road was the scene of great festivities on August 27, the occasion of the 70th birthday of Mrs S. Aaron Hardoon, widow of the late Jewish multi-millionaire. Outside the main gate of the garden a large archway of red was erected while innumerable lanterns and electric lights formed an illuminated entrance over the path leading from the main gate to the residential buildings of the garden.

Throughout the day, streams of local residents, including many leading Chinese and foreigners, visited the garden and paid their respects to Mrs Hardoon, known for her philanthropic acts.

Scores of Buddhist priests participated in the celebrations, as Mrs Hardoon is an ardent Buddhist, and the ceremony was performed in accordance with Buddhist rites. For the entertainment of the guests, actors were invited to give theatrical performances on a specially-erected stage in one of the residential buildings. Thousands of firecrackers were let off as a good omen for long life.

The guests were then invited to a spacious hall in one of the residential buildings where numerous red scrolls made of silk were hung on the wall, bearing characters eulogizing Mrs Hardoon’s deeds. Hundreds of baskets of flowers were in evidence, these being from the friends of both Mrs Hardoon and her deceased husband.

The late Mr Hardoon, who started his career as a godown watchman, eventually built a fortune reputed to be the largest in Shanghai. After his death, the estate had been administered by his widow who was once named as the defendant, in the British Court in China by some of her deceased husband’s relatives who claimed a share of the Hardoon millions.