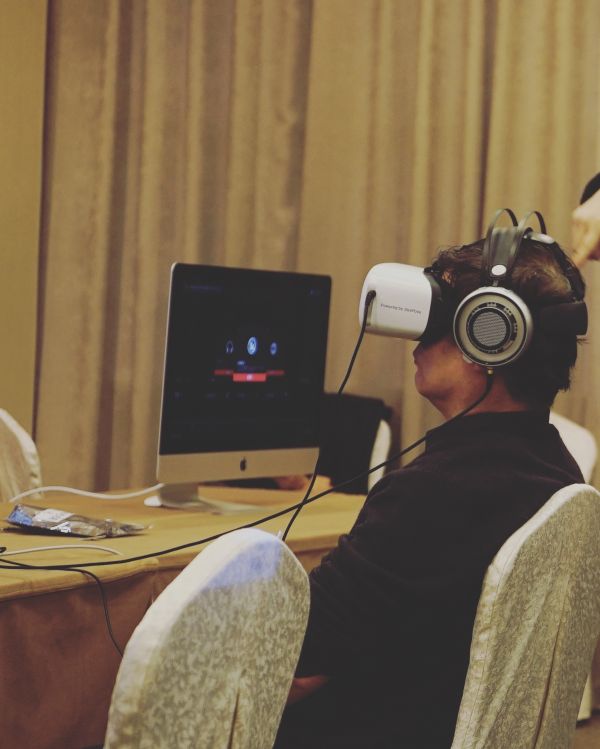 Chen strapped a pair of virtual reality goggles to his eyes and put on a headset. As videos played, his heart pounded and his hands sweat.

Chen, a heroin and methamphetamine user for seven years, is undergoing treatment at the Zhejiang Liangzhu Rehabilitation Center in Hangzhou, capital of east China's Zhejiang province. The center is among several Chinese facilities to use virtual reality technology for drug rehabilitation.

There are over 1,100 patients at the center. Virtual reality (VR) treatment is introduced to patients who have undergone a typical detox program for at least a year.

"For now, we mainly use VR treatment for methamphetamine addicts. It is easy for meth addicts to quit the drug physically, but not psychologically," said Xia Xia, a therapist at the Liangzhu center.

Chen has participated in two VR treatment sessions so far. In each session, he donned goggles and a headset while a computer was used to record his heartbeat.

Three videos played for about 20 minutes in total. The first one showed familiar scenarios that trigger drug cravings, Xia said.

Chen watched videos showing several people gathered in hotels to use meth. He heard lighters hitting the table and the rumbling sound of meth burning in glass pipes. "The scenarios were so familiar," Chen said.

The second video, a form of aversion therapy, showed people experiencing dizzy hallucinations, their bodies zipped up in bags, and maggots gnawing at their bones.

"So much horrible pain came when I used drugs. It awakened my worst fears and made me want to vomit," Chen said.

The third video showed appetizing meals and happy family time. Chen's heart pounded fast. He has spent too much time in repeated rehab treatment and misses his family.

"The best thing about a person is his or her memory, and the worst is also memory," said Dr. Wang Yongguang, an expert with the Zhejiang Provincial Rehabilitation Management Bureau, who helped develop the VR treatment.

"Progressively playing videos aims to help them turn their reliance on drugs into hate and fear of drugs," Wang said.

"This is the first step. We use acoustic and visual stimuli to trigger empathy," he said, adding that in the future they may stimulate other senses, including touch and smell.

In clinical trials, 60 drug addicts underwent six VR sessions in 15 days. Seventy five percent of them showed markedly low cravings for drugs. Among a comparison group that did not use VR sessions, only 3 percent of patients showed lower desire for drugs.

"The existing treatment methods are not that effective in detoxifying patients from synthetic drugs like meth, and that is why we turn to new methods," said Yao Yongqing, deputy director of the bureau.

Though VR techniques have yielded results for addiction, their effectiveness and precision need more time to improve, said Yao.

Yi Jiangwei, marketing director of Hangzhou Saiwengsi Technological Company, which developed the VR hardware and system, said they will add more contents to the videos and conduct more tests to improve the system.

Starting next month, the system will be tested in more rehab centers in Zhejiang, he said.