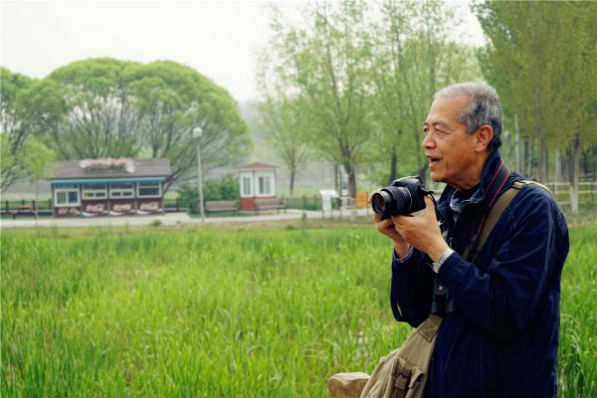 “Fewer and fewer owls can be seen in the Temple of Heaven,” says Lei Hong, a Beijing native who has been bird watching for 20 years.

He found only two or three owls in  the imperial garden last winter, compared to 30 or some a decade ago, suggesting owls’ food chain might have been broken.

The park authorities have offered no official statistics, but fellow ornithologists agree with Lei.

Urban expansion, lack of food and deteriorating environment are all possible factors in the dwindling numbers of migratory birds visiting Beijing from November to April, noticed Zhao Xinru, Assistant Professor of Zoology at Beijing Normal University.

“The Temple of Heaven should be a good habitat for birds,” Zhao says, “as it has many tall cypresses with thick branches, where owls like to perch.”

But today, “the woody garden has become a lonely island in a concrete forest.” And the trees are trimmed so falling branches don’t hit park visitors, which might make it difficult for owls to hide and sleep.

A campaign against rats aimed at protecting the ancient buildings – has also destroyed the owl’s staple food, says Zhao, a member of China Ornithological Society.

The creatures spit out what they cannot digest that helps people trace them. Lei found more bird feathers than rat bones in the owls’ saliva.

Zhao noted that the breeding grounds may also have problems. The owls fly from the north to overwinter in Beijing. If the local environment is deteriorating or changing, there will be fewer breeding populations and fewer in the wintering ground.

“We don’t have any data to support that though,” he adds, “because the investigation would be long and laborious, and it requires lonely work by researchers."

Lei, 59, says owl is “a divine bird”, not only because it has inspired engineers to imitate its outstanding night vision and stealth flying, but also due to its special appearance.

“It is hard to recognize as the feathers on back of its head are very like its face,” says Lei.

In fact, owl was regarded as the Divine Bird during the Qing Dynasty. In the Forbidden City, the court even set up a divine pole, on the top of which was a pot full of food to feed owls. This gradually attracted a huge number of flocking together around the imperial city.

But for Lei, “It is ridiculous. It is superstition.”

Lei is an avid birdwatcher, using his telescope and camera year round all over Beijing. He can easily identify various species by their calls within two or three seconds. He attributes his acute sense of hearing to a decade of keeping caged birds.

He was a regular at Beijing’s bird market. “I would buy birds I was unfamiliar with, no matter where they came from.” He remembers a couple of birds from Indonesia cost him 60 yuan, “a big money in the 1990s.”

His largest cage, 1.5 meters wide and 0.8 meters high, had a tree stump where birds could perch and rest.

Every summer, Lei would wash the cage with hot water and disinfectant. He read widely about birds and even learned some veterinary skills. If a bird was ill, he would make medicine for it.

Even at home, he liked to watch his birds through binoculars, which helped him find “interesting details,” such as birds dozing, fighting and breeding.

“I was very depressed when they died,” says Lei, who would bury them in his flowerpots. In 1996, he read an article about Friends of Nature, China’s first environmental NGO. He wrote to its founder, and became a member the next year.

The way they cared for birds was a revelation. “They wanted people to observe birds in the wild. Cages were a selfish hobby that harmed birds,” says Lei.

He said goodbye to his birds and set them free. “I released the northern birds at parks, and the southern ones I released during the migration season,” Lei recalls tearfully.

But he was reborn. He returned to the natural environment, traveling around Beijing and neighboring provinces to watch birds. He went as far afield as Xinjiang.

He loves to photograph birds, regardless of the weather, mosquitoes or physical discomfort. He once snapped a yellow bittern bird just before hitting the water to catch a fish in a pond. 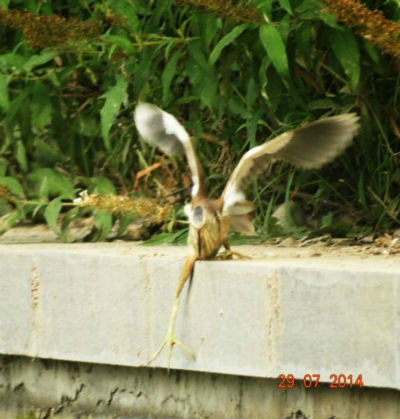 The picture helps him win acclaims on bird watching websites.

Fans say Lei’s pictures are “full of humanity”. He calls a walking magpie “a smart gentleman”; he describes a sparrow hawk in the water as “taking a cold bath”; and in his eyes, a washbowl-sized nest looks like a bird “mansion”.

“Their world is similar to ours,” he says, “with joy and pain, poor and rich.”

In 2013, Lei quit his job at a travel agency and had more time to watch birds. He volunteered to do bird surveys, lecture in schools, and joined a growing group that included foreign bird watchers. 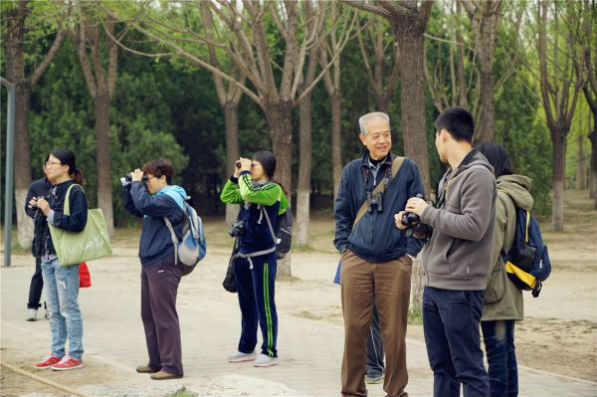 Bird watching, however, was little known in China until the 1990s.

People believed sparrows stole grain, and this was supported by biologists.

About 450,000 sparrows were killed in Beijing in three days that year, according to a report in the People’s Daily.

But cockroaches flourished without the sparrows in early 1960.

In the 1990s, bird watching grew in Beijing and other big cities. Zhao Xinru noted the mainland has about 40 specialized bird watching organizations.

Terry Townshend, a British man working for an environmental organization, has been a bird watcher in Beijing for four years.

He was amazed to record 460 species in the capital that he describes as an ideal ”service station” on bird migration routes.

The number of bird watchers in China is still relatively low, but he believes it will grow as Chinese people have more leisure time and wealth. 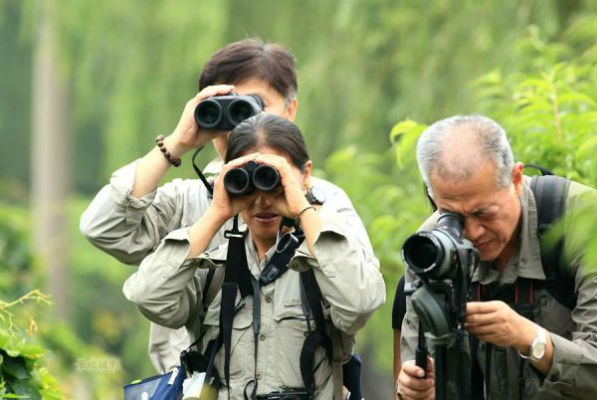 Lei Hong and bird watchers are watch birds in the wild. Photo provided by Lei Hong

After the hardship in the Cultural Revolution, Lei devoted most of his time to making money. Years of bird watching have made him an admirer of their freedom and casual lifestyle.

“It allows me to focus without distractions,” says Lei.

However, not all bird watchers have found inner peace.

Lei once caught a photographer throwing stones to wake up owls in the daytime and others lure birds close with food for a good picture.

“They just like the picture, not the birds,” he says. “How can you impose your thoughts on another species and disturb its way of life?"

“Such behavior violates natural law and will eventually affect our own existence.”