A "smart" day in Wuzhen

People communicate with a doctor through a smart home terminal at the Light of Internet Exposition of the fourth World Internet Conference in Wuzhen, Tongxiang City of east China's Zhejiang Province, on Dec. 2, 2017. Photo by Li Xin

After checking in to a hotel in Wuzhen in east China's Zhejiang Province, Fu Ruyi ordered a set meal by scanning the QR code on his bedside table. It was very late on Thursday (Nov. 30) night, but the food was delivered to his room within 30 minutes.

On Friday (Dec. 1) morning, Fu entered one of Wuzhen's scenic spots by "swiping his face" via a facial recognition system, which streamlines the ticket-checking process to last no more than three seconds.

At the pier, Fu, the president of an information technology company, scanned a QR code and all the sculling boats on the river appeared on his phone screen. He hailed one and left the boatman a message.

Sitting as comfortably as he could on the boat, he tapped open the "Wuzhen Summit" app, which he used to browse the latest news and the schedule of the World Internet Conference, scheduled from Sunday to Tuesday in the picturesque river town. 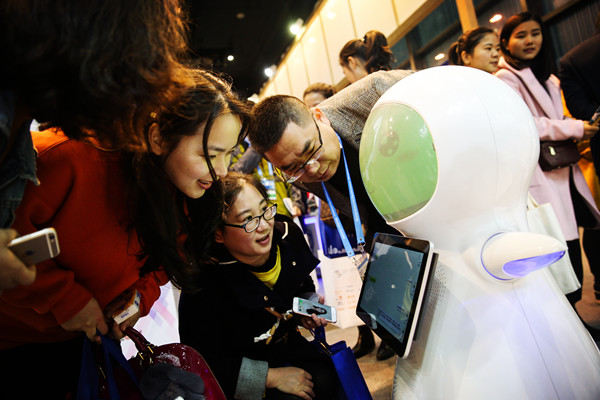 People interact with a robot at the Light of Internet Exposition of the fourth World Internet Conference in Wuzhen, Tongxiang City of east China's Zhejiang Province, on Dec. 2, 2017. Photo by Zheng Huansong

The introduction page for a session on Monday caught his attention. He was invited to attend the session. He made a digital note of the venue, timetable and event participants.

App users who were not invited to the conference or could not visit Wuzhen are able to browse the exhibition halls and interact with exhibitors via the app.

"There have always been new things to amaze me every time I have visited Wuzhen for the past four years," Fu said as he stepped ashore from the boat. He went directly to a special conference "volunteer."

"How do I go to the Waterside Resort?" he asked.

"Please walk along the road and turn left at the first intersection. The hotel is on your right about 100 meters down the road," a robot answered in a pleasant voice. 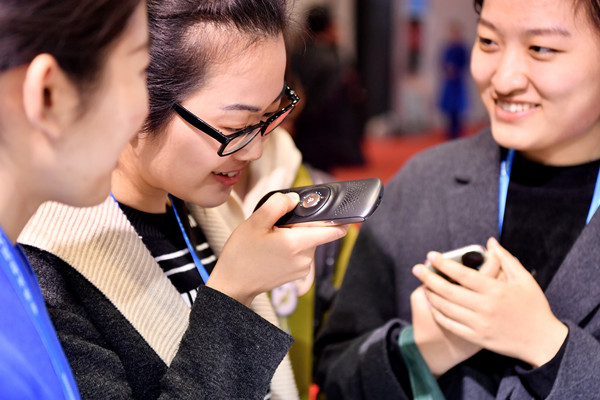 People try out a voice-recognition translator at the Light of Internet Exposition of the fourth World Internet Conference in Wuzhen, Tongxiang City of east China's Zhejiang Province, on Dec. 2, 2017. Photo by Li Xin

Based on facial and phonetic recognition, the robot helpers are able to answer questions about conference schedules, locations of venues, weather and even the nearest toilets.

There are several dozen robots on duty at hotels, exhibition halls, venues and streets.

Fu continued exploring. At the street corner, he came across another helper -- a sturdy garbage collection robot. He said "Hey" to it and the robot moved in his direction.

On its way to Fu, the robot opened its lid, saying, "Please give me your garbage. Thank you!"

Fu threw the empty coffee cup into the robot.

Fu arrived at his destination, the Waterside Resort, where he had a business meeting with a manager of a virtual reality (VR) rehabilitation training company. 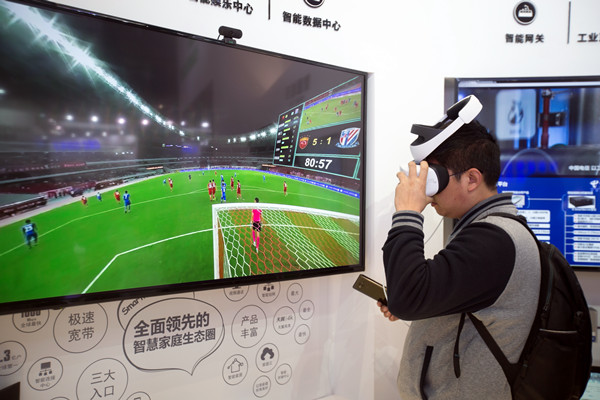 A man watches football match with VR glasses at the Light of Internet Exposition of the fourth World Internet Conference in Wuzhen of Tongxiang City of east China's Zhejiang Province, Dec. 2, 2017. Photo by Meng Dingbo

Fu said VR has proven beneficial in training patients who have had a stroke or spinal injuries by making the dull process more interesting, like playing video games at home.

On his way back to the hotel, Fu passed a cashier-free mini-market, where he bought drinks, snacks and a magazine using mobile payment.

His smart phone was running out of battery, and he needed to recharge it before he was cut off from all the services and information -- almost the whole world, it seemed .

As he picked up the pace, he noticed a box full of shared power banks at the reception desk of a restaurant. He suddenly relaxed and walked in.