On April 21, China released its first white paper centered on its youth, "Youth of China in the New Era." This year also marks the 100th anniversary of the founding of the Communist Youth League of China (CYLC).

Nowadays, young Chinese identify more and more with the splendors of Chinese civilization. They are deeply proud of the Chinese nation, and are more active in promoting traditional Chinese culture and boosting cultural confidence across society.

China has pledged to go all out to preserve and develop its excellent traditional culture, eyeing a "marked boost" in the international influence of Chinese culture by 2025.

Hailing from a farming family in Zhuge Village, Shanxi's Linfen City, Liu has a passion for ancient China's awe-inspiring architecture, especially the buildings in the culture-rich province.

Over the past eight years, he has recorded over 50 historic structures on paper, depicting himself in front of each old building. "It is me, like countless others who have looked up to the heritage through the ages," Liu said.

On April 21, China released its first white paper centered on its youth, "Youth of China in the New Era." This year also marks the 100th anniversary of the founding of the Communist Youth League of China (CYLC).

Young Chinese identify more and more with the splendors of Chinese civilization. They are deeply proud of the Chinese nation, and are more active in promoting traditional Chinese culture and boosting cultural confidence across society, according to the white paper. 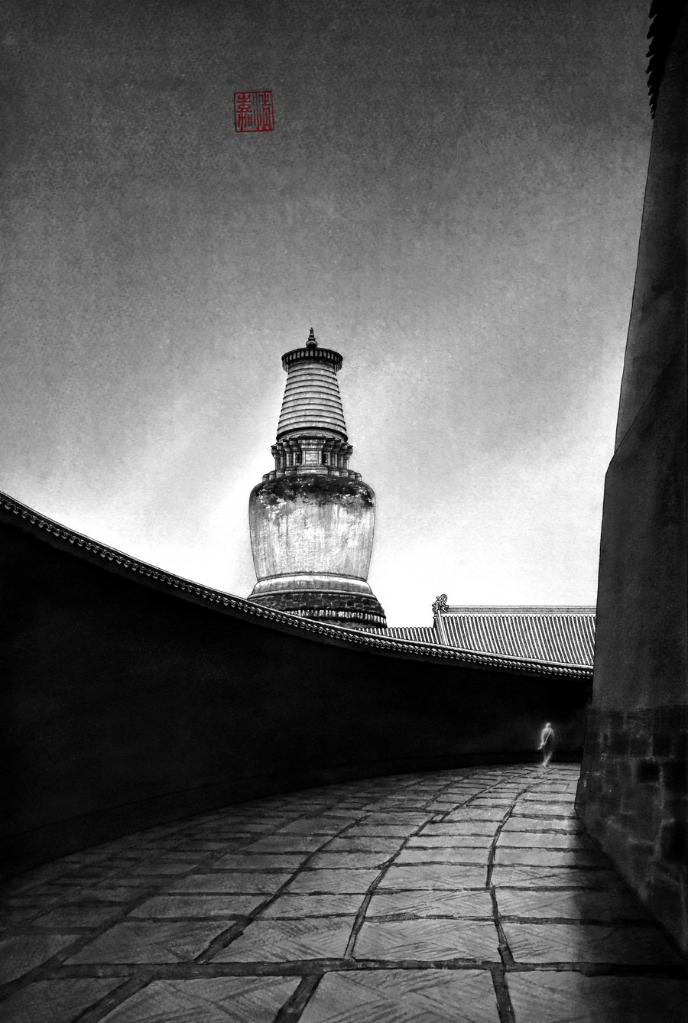 File photo provided by Liu Kai shows a painting of his depicting a view of the Tayuan Temple on Mount Wutai in north China's Shanxi Province. (Xinhua)

Over the years, China has placed great emphasis on the passing on and promotion of its culture, with a raft of guidelines and proposals launched to fuel the nationwide protection, innovation and spread of its invaluable culture.

Liu is not alone in his passion for China's past. After posting his paintings online, his artworks have wowed netizens and attracted collectors across the country.

China has pledged to go all out to preserve and develop its excellent traditional culture, eyeing a "marked boost" in the international influence of Chinese culture by 2025.

According to the guidelines issued by the central government in 2017, major achievements are expected to be registered in traditional culture-related research, education, protection, inheritance, innovation and exchanges by 2025.

China's top design to rejuvenate its fine culture has received an enthusiastic echo from the public.

The videography and translation involved the efforts of 23-year-old Sidar, who is of Sherpa descent. His hometown Zhentang, deep in the Himalayas and bordering Nepal, is home to more than 2,600 Sherpa people.

The young man's mother is a practitioner of Zhentang Sherpa dance. When Sidar was a child, he used to watch his mother teach locals of all ages the ancient steps of the dance. 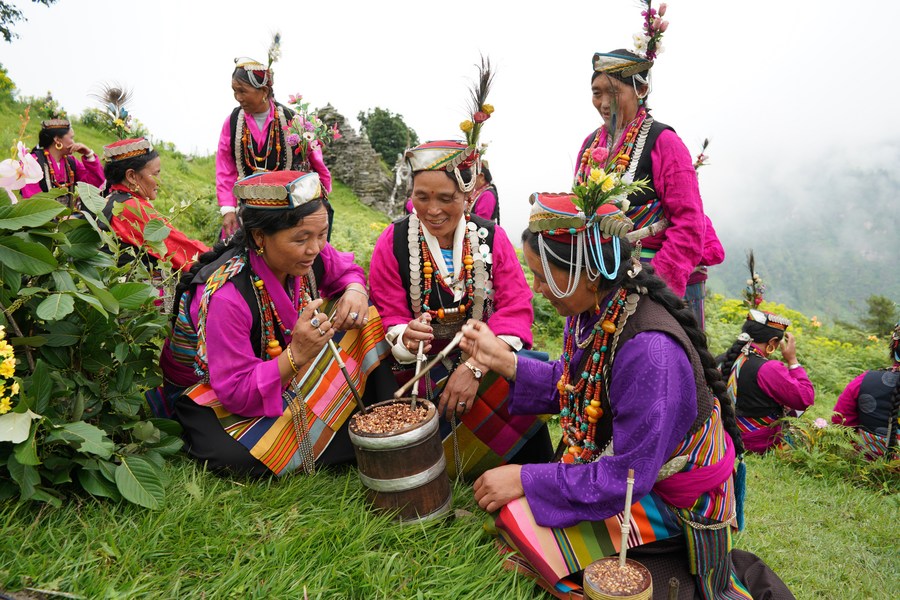 Scholars have frequently visited the sleepy town to conduct studies of the unique local culture. "The Sherpa culture is diverse and rich. Scholars make academic achievements, but the responsibility of real cultural inheritance falls on the shoulders of local youths like Sidar," said Tarring Namgel, an associate professor at the College of Art of Tibet University. He traveled to the region to research Mani Drama, another time-honored form of Sherpa cultural heritage.

Increasing participation in such trips inspired Sidar to record local culture through his lens. Old gadgets of the Sherpa people, dancing and vibrant festival celebrations have since become the subjects of his videos.

"Our culture is like an ancient river that flows inside us from history to today," Sidar said. It is his dream to make a documentary and establish a museum of Sherpa folk culture.

More and more young Chinese people have joined efforts to preserve cultural heritage thanks to China's blockbuster documentaries and television shows such as "Masters in the Forbidden City" and "National Treasure."

When Zhu Xiaocong, now an ancient calligraphy and painting conservator, landed his job at Shanxi Museum seven years ago, he only had three or four colleagues. But now, the team has expanded to about 30 people, with its members mostly born after 1990.

Zhu's studio may seem like a kitchen to the untrained eye, as a variety of brushes hang on the walls, knives rest in drawers and pots of different sizes litter the counter. Lying on his workbench is a piece of calligraphy dating back to the Qing Dynasty (1644-1911), spoiled by faint stains and cracks. 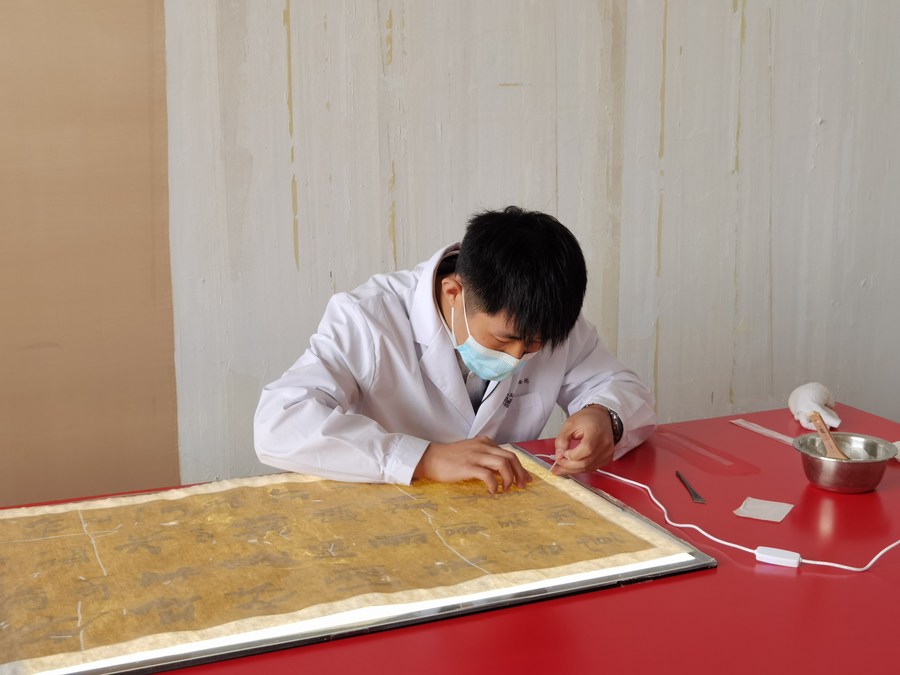 Zhu Xiaocong, a restorer for painting and calligraphy, works on an artwork at the Shanxi Museum in Taiyuan, north China's Shanxi Province, April 27, 2022. (Xinhua/Wang Xuetao)

Zhu is "performing surgery" on the delicate artwork. He scrapes off the stains with a knife and sticks thin white strips to the back of the paper on damaged areas.

"It can take days to merely open the frames of articrafts using tweezers, as ancient Chinese people used to write and draw on fragile materials," Zhu explained.

"Young people are energetic, but they can lack experience when it comes to artifact restoration," said Guo Zhiyong, deputy director of the museum's cultural artifact conservation and research department. "However, their techniques can be greatly improved through training, teaching guides from their seniors, and field trips."

Over the past seven years, Zhu has single-handedly restored over 100 ancient paintings and calligraphy works. "All my efforts are worthwhile when I see the artifacts restored to their former glory and appreciated by museum visitors," he said.