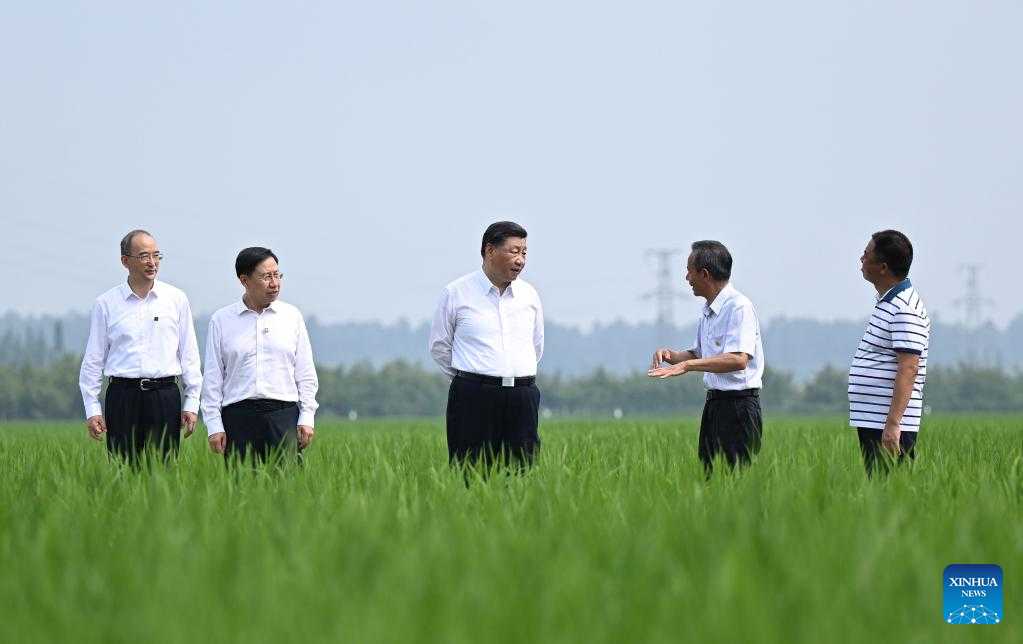 At a seed production base in Dazhu County, southwest China's Sichuan Province, rice farmer Fan Tiancheng is taking intensive care of his 140 mu (about 9.3 hectares) field of "golden rice seeds," as the seeds are expected to increase rice yield and farmers' income.

Seed farmers like Fan are entitled to special insurance premiums and agricultural subsidies, which have boosted farmers' enthusiasm to engage in cultivating hybrid seeds.

Rural cooperatives contract these farmers for the purchase of their yield. In every planting season, the cooperatives pay for the seeds, pesticides, fertilizers, and other agricultural materials in advance and provide free technical services for the farmers.

Xi Jinping, general secretary of the Communist Party of China Central Committee, on Wednesday visited the village of Yongfeng in the city of Meishan in Sichuan to inspect a high standard paddy field base.

Xi, also Chinese president and chairman of the Central Military Commission, said that it was time consuming for cultivating improved varieties of rice as it required repeated experiments and selection, and all the country's scientific and technical workers in the agricultural sector have made arduous efforts.

Xi expressed recognition to the workers for their invaluable contributions to safeguarding national food security and ensuring that the people enjoy ample supply of food and clothing.

Xi said advancing agricultural modernization requires efforts not only of experts but also those of all farmers, that the promotion and application of modern agricultural science and technologies and training of farmers must be strengthened, all big grain growers must be organized to actively develop green, ecological, and efficient agriculture.

Xi stressed that the Chengdu Plain has been lauded as a land of abundance since ancient times, that the area of farmland must be ensured and such a precious land for food production must be well protected. He also called for even greater efforts to bolster up grain production and build a higher-level "granary of heaven" in the new era.

As one of the demonstration models of high-standard farmland in Sichuan, Yongfeng boasts 4,700 mu of such farmland. It has taken the lead in realizing a complete mechanized production of rice, and established the largest experimental base featuring new rice varieties and new technologies in the province.

"We have the confidence and determination to ensure the food supply for the Chinese people through our own efforts," Xi said during the inspection.